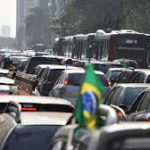 Even with the long car traffic there were still some students from USP (University of Sao Paulo) who blocked Anenida Paulista, one of the most principal roads in the city of Sao Paulo, to protest against the Brazilian government. Protesters are fighting because the Brazilian government overspent to prepare the country for the World Cup, and there are many people starving to death and living in very bad conditions in some part of the country. The amount of cars in the city, plus tourists from all over the world in Brazil for the World Cup, made a big difference in Sao Paulo’s car traffic. That is why public transportation in very important these days. If we compare Brazil to many countries in Europe, we will see that the public transportation in Europe is much better and well developed than the Brazilian public transportation. In places where public transportation is efficient car traffic tend to be much less. Another fact that makes Brazil one of the most places with the longest car traffic, is that people there usually do not get rid of their junk cars. Since cars are more expensive in Brazil, the population tends to drive their cars much more then us in the United States. When a car in the United States is giving too many problems people usually sell them for scrap metal, which these cars will no longer be on the road. On the other hand, Brazilians tend to keep their cars forever which causes the cities to be full of cars and many times junk cars. Population in the area of Boston MA, Fall River MA, New Bedford MA and Providence RI are very proud to have companies like Sale Junk Cars who pays cash for junk cars, and remove them from the cities for recycling purposes. That way the city looks better and there are not many junk cars on the road, which should not be. Everyone in Massachusetts and Rhode Island should contact Sale Junk Cars before they want to get rid of a junk car because they are who pays the most and offer the most reliable service. You can do that by filling up their quote request form on their website, or by calling them at 508-802-5034.
Share This Story, Choose Your Platform!

We look forward to helping you get Top Dollar for your Junk Car!

Take us with you!